(Authors note: Here, I revive a long dead section of my blog, since, fittingly, this film, Shin’ya Tsukamoto’s cyberpunk nightmare Tetsuo, seems to have rekindled in me a love for the bizarre, the grotesque and the outright horrific.) 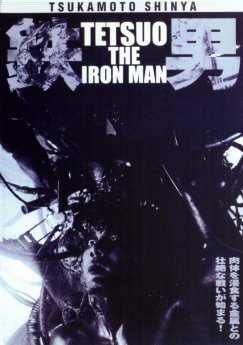 We see a man, known only as The Fetishist (Shin’ya Tsukamoto) walking down the street. He walks into a warehouse, and we then see him impale a piece of metal into his leg, gaining a sickening gratification from the act. And so begins the bizarre horror that is Tetsuo: The Iron Man. And it only gets weirder from here, so fasten your seatbelts.

After the Fetishist is finished stabbing himself, he walks into the middle of the street, and is run over by a Salaryman (Tomorowo Taguchi), possibly killing him. After this, narrative goes out the window, and the film descends into a kaleidoscopic nightmare.

Shot in stark black-and-white, Tetsuo presents a bleak, dystopic vision of a world that may be so reliant on technology that it’s very populace are succumbing to it in the form of transformations that are in equal parts fascinating and grotesque.

All of Tetsuo is very visceral and VERY graphic, and so it isn’t exactly an easy watch. I’ve seen plenty of extreme cinema in my time, but there were still some scenes in here (namely the infamous rape scenes) that were awfully difficult to watch. The film indulges in very sick and deviant sexuality, toying with sadomasochism; with the Fetishist impaling himself at the beginning of the film, and the Salaryman’s girlfriend (Kei Fujiwara) gaining gratification after stabbing the Salaryman in the neck. Sexuality, here presented in a bizarre, violent, cyberpunk fashion, is a key theme that runs throughout Tetsuo, with one of its most popular readings being one of the Salaryman’s metamorphosis into the titular Iron Man being metaphorical of his discovery of his own sexuality, something that can be seen in the way a nightmarish rape scene (his girlfriend, possessed by what is seemingly the spirit of the Fetishist, gains a bizarre phalic extension and rapes him_ being then mirrored in a heterosexual context.

From its editing to its use of music, the film carries with it a fascinating kinetic energy, something is always moving or happening. It manipulates time in a unique and interesting way, ending some of its nightmare sequences by literally moving time backwards, showing characters running backwards and returning to their original positions, even further skewering any kind of narrative logic. This kinetic force is carried into the films visual effects as well, which, while not having aged gloriously, are still effective and unsettling. Stop-motion is used in order to show the Salaryman’s metamorphosis into the Iron Man, with each jarring moment being punctuated and powerful.

Of course, it’s not a perfect film. As I’ve already mentioned, the visual effects don’t always stand up, and the script has some issues, with some of the dialogue sounding weak and forced (something that often feels reflected in performances that veer into slightly over the top territory at times), which can detract from the sheer intensity of some scenes. And it’s also quite obviously not a film for everyone; with it’s extreme physical and sexual violence, bizarre structuring and some equally bizarre thematic exploration, if you’re not exactly intrigued by it, I can’t say I blame you.

Visceral and difficult to watch, Tetsuo is not an easy sell. A stark nightmare of bleak dystopia and savage sexuality, you will know if this is the kind of film for you; a surreal piece of horror that runs on nightmare logic, perhaps a little akin to Eraserhead. If you feel you’ll be interested in Tetsuo, I wholeheartedly recommend you watch it. But you’ll have to be prepared for very extreme cinema. Tetsuo is nothing short of a kaleidoscopic tour de force in the nightmarish, and the spirit of the Fetishist may well burrow his way into your consciousness once the final credits have rolled.

My master-post, if you will, for the 2013-2014 cinematic awards season, chronicling predictions, musings and changes in the race, all the way to Oscar night in February 2014.

I’ll admit I have a problem: Early 2014 predictions

I’ll admit I have a problem: early 2014 Oscar predictions

I’ll be the first to admit that I’m a bit of an addict in terms of awards season. I love it for a multitude of reasons, but that’s the subject of a totally different post. So here, I figure I’ll present my earliest list of predictions, assuming 10 nominees for Best Picture. And do keep in mind this post will just be a list, since so many of these performances are unseen, it doesn’t seem like there’s quite enough to say about them yet. I’ll also be predicting a winner in each category, which will be put in bold.

Ryan Gosling for The Place Beyond the Pines
Michael Fassbender for Twelve Years a Slave
Josh Brolin for Labour Day
Ewan McGregor for August: Osage County
Mark Ruffalo for Foxcatcher

My predictions and commentary on the 2012-13 Awards season, leading up to the Oscars.

Reaction to the Oscar Nominees

For Your Consideration – Denis Lavant